The National Hurricane Center is tracking a total of five systems over the Atlantic and Gulf of Mexico Saturday, including one hurricane, two tropical storms and two other disturbances.

Here’s the latest update from the NHC as of Sept. 19.

What’s out there and where are they?

Hurricane Teddy is about 605 miles southeast of Bermuda.

Tropical Storm Wilfred is about 885 miles west of the Cabo Verde Islands.

Tropical Storm Beta is 270 miles southwest of the mouth of the Mississippi River.

Disturbance 2 is near the west coast of Africa. 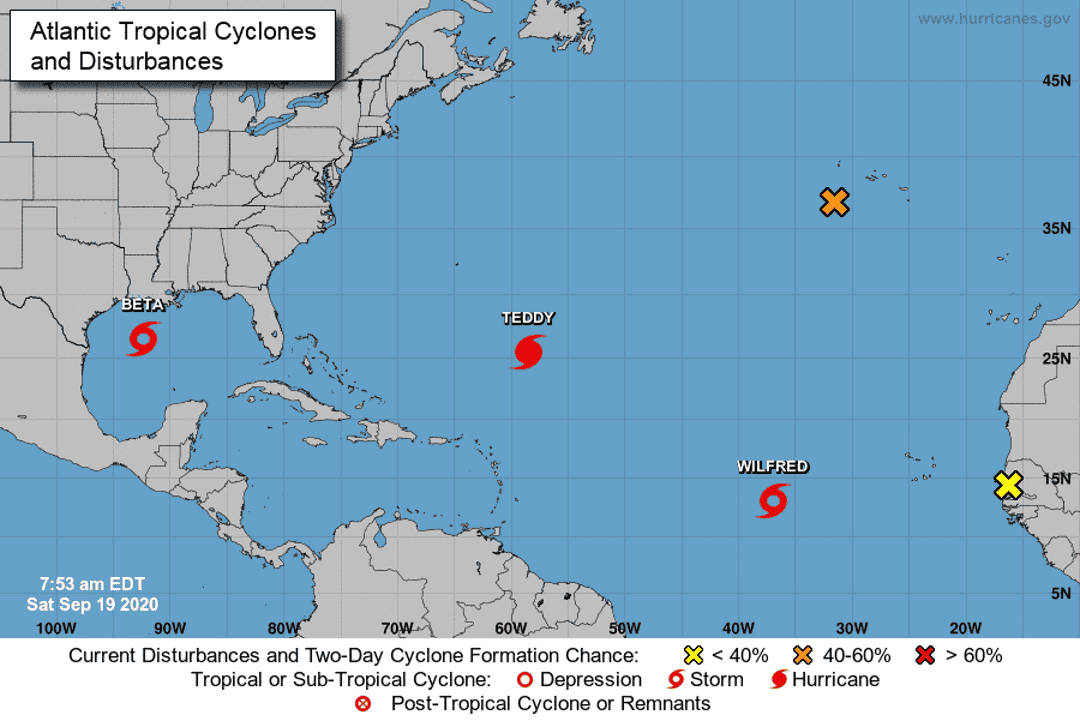 How likely are they to strengthen?

Hurricane Teddy: Maximum sustained winds are near 125 mph with higher gusts. Some fluctuations in intensity are likely today. A more pronounced decrease in Teddy’s maximum winds is forecast to begin on Sunday, but the wind field of the hurricane is forecast to increase substantially at the same time.

Tropical Storm Wilfred: Maximum sustained winds are near 40 mph with higher gusts. Small fluctuations in intensity are possible over the weekend. A general weakening trend should begin by late Sunday and Wilfred is forecast to become a remnant low in a few days.

Tropical Storm Beta: Maximum sustained winds are near 60 mph with higher gusts. Slow strengthening is forecast, and Beta is expected to become a hurricane on Sunday.

Who is likely to be impacted?

Tropical storm conditions are expected to affect Bermuda and beginning Sunday afternoon or evening. These conditions may linger through most of the day Monday.

Large swells generated by Teddy are affecting the Lesser Antilles, the Greater Antilles, the Bahamas, and Bermuda. Swells from Teddy will begin affecting most of the east coast of the United States later today and will reach Atlantic Canada by early Sunday. These swells are likely to cause life-threatening surf and rip current conditions.

Hurricane conditions are possible along the Texas coast between Port Aransas and High Island by late Monday.

Tropical storm conditions are possible along the upper Texas and southwestern Louisiana coast as early as tonight.

There is an increasing risk of significant rainfall and flooding along the Texas and Louisiana coasts from Sunday through at least the middle of next week as Beta is forecast to move slowly near the Texas coast.

Tracking the tropics in real time