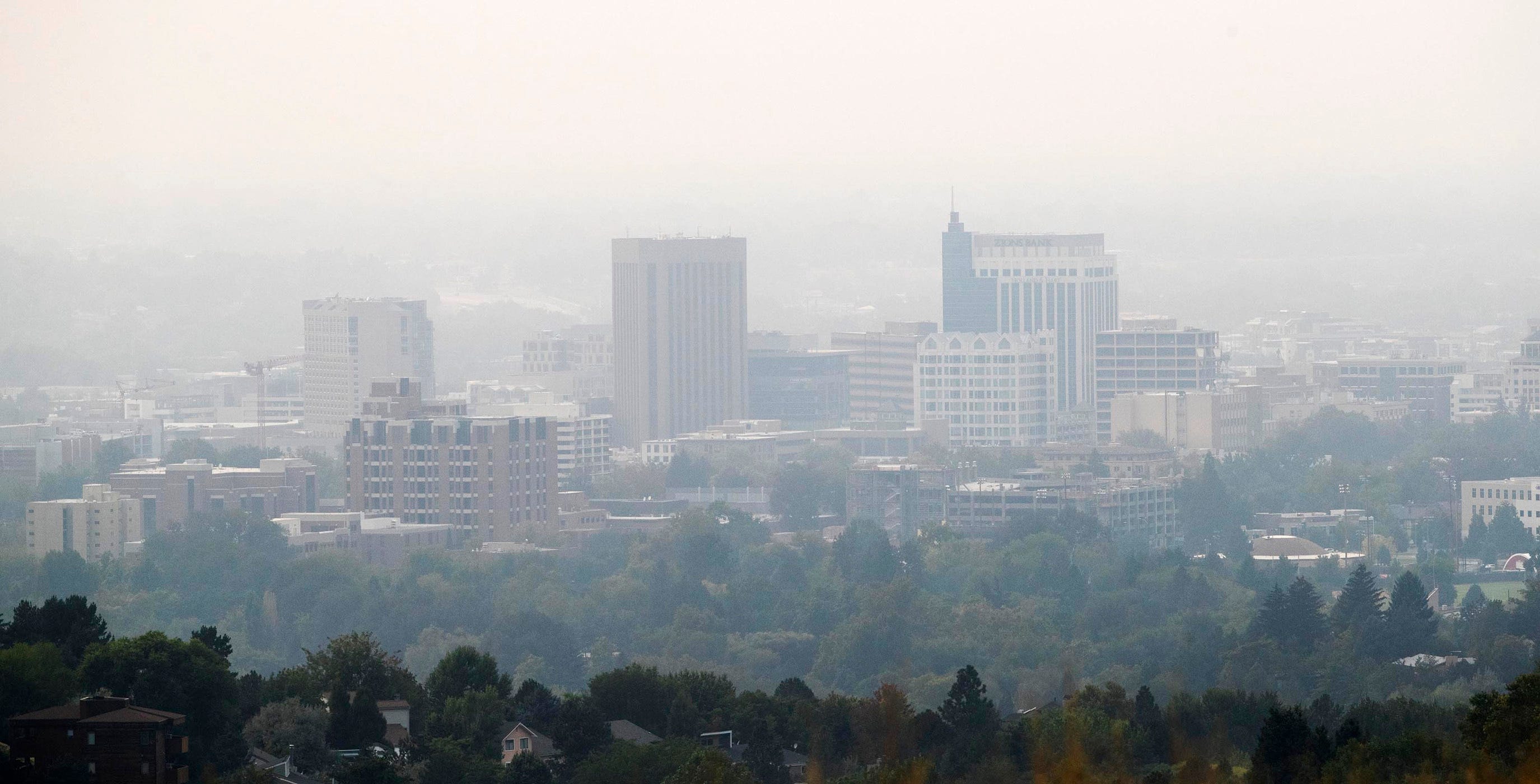 ARLINGTON, Va. — Intense smoke from historic wildfires that is filling the lungs of millions of Westerners is clouding skies across the nation.

AccuWeather meteorologist Matt Benz said you can draw a line from California through St. Louis and on to Norfolk, Virginia – pretty much everyplace north of that line is looking at smoke-tainted skies. Areas south of that line see less smoke because of air coming up from the Gulf.

“Amazingly, that wildfire smoke has traveled thousands of miles and finally has reached the East,” Benz told USA TODAY. “It looks like clouds, but it is smoke. And we are stuck with this until the weather pattern changes.”

A weak cold front expected to sweep through much of the East in coming days probably won’t be enough to clear the air, Benz warned.

The upside is that the smoke is so high in the Eastern sky that residents aren’t breathing it.

That’s not the case along the fiery West Coast, where the fires have killed at least 36 people and burned through an area larger than the state of Connecticut. The crisis has forced 220,000 people to flee their homes in California, Oregon and Washington — and it could be weeks before it’s safe for them to return, the American Red Cross reported Tuesday.

The National Interagency Fire Center said some progress has been made against the blazes: Six large fires have been contained, including two in Oregon, the agency announced Tuesday.

But the smoke hasn’t let up across the West Coast. California Gov. Gavin Newsom compared breathing the air to smoking 20 packs of cigarettes. The 7 million residents of Central Valley, a 450-mile-long swath of the state’s interior, were warned to stay indoors to reduce exposure to particulate matter emissions.

“No matter which way the wind is blowing, the valley is getting smoke,” said  Jonathan Klassen, director of air quality science at San Joaquin Valley Air Pollution Control District. “The valley is surrounded by fire, so no matter what happens, we will get smoke.”

In Oregon, at least 10% of emergency room visits are for asthma-like symptoms, said Gabriela Goldfarb, section manager of environmental public health at the Oregon Health Authority.

Oregon ranks air quality as good, moderate, unhealthy for sensitive groups, unhealthy, very unhealthy or hazardous. Smoke levels fluctuate between unhealthy and hazardous for Oregon and southwest Washington. When smoke levels are hazardous, everyone needs to protect themselves. Goldfarb urged people to stop working outdoors when air quality is unhealthy or worse.

Paper masks commonly found at hardware stores are designed to trap large particles and are not designed to protect your lungs from smoke, the Health Authority warned.

“Standard masks are not completely filtering out the air,” Benz said. “When you have smoke in the air, you need a beefier mask.”

Vision can also be a problem. Alaska Airlines and sister flyer Horizon Air suspended all flights to and from airports in Portland, Oregon, and Spokane, Washington, until at least 3 p.m. local time Tuesday.

“Improving weather conditions in the coming days could begin to dissipate smoke in Portland and Spokane,” Alaska Airlines said in a statement. “However, other airports in the West could be impacted by drifting smoke.”

Wildfire smoke and air purifiers: Here’s what you need to know

The August Complex Fire, the largest wildfire in California history, is threatening the country’s biggest marijuana-growing region: the rugged and famed Emerald Triangle.

The wildfire has burned through more than 1,100 square miles across five counties in Northern California and is on a westward path that threatens a region known for its marijuana farms, The Press Democrat reported.

The rural region about 200 miles north of San Francisco has been rooted in cannabis cultivation for decades and contains thick public and private forests that are likely to burn.

Fire within 500 feet of historic Mt. Wilson Observatory in California

“The #BobcatFire is within 500 ft of the Mt. Wilson Observatory & crews are in place ready to receive the fire,” the U.S. Forest Service tweeted Tuesday.

The observatory played a pivotal role in early 20th-century confirmation that galaxies exist outside the Milky Way and that the universe is expanding. In addition to its famed 100-inch telescope, the peak has other historic telescopes, as well as modern astronomy instruments in use.

The observatory said Monday that all personnel had been evacuated.

President Donald Trump repeated his claim this week that Democratic leaders in California deserve blame for the fires, having failed to clear leaves and dead trees from forest floors.

Wally Covington, professor of forestry at Northern Arizona University, agreed that forests have become overgrown and need to be thinned, but “not with a lawn rake.” Some of the policies that led to overgrown forests, such as aggressive fire suppression, were implemented more than 100 years ago, so blaming California’s current leaders doesn’t make sense, Covington said.

He noted that two-thirds of the burned acreage is on federal lands and not within the purview of state officials. Covington said people living in areas burning are paying the price because policymakers would not address climate change and the effects of fire suppression on forests 30 or 40 years ago.

“Amongst fire scientists like myself, we’ve been convinced that this train wreck was going to happen for years and years,” he said. “I was hopeful back in the ’90s and ’80s that maybe we would reverse climate change effects. Now I’m kind of pessimistic.”

Oregon Gov. Kate Brown said she will veto 34 sections of state budget bills to help fund the costs of battling the wildfires. Among the vetoes: planned cuts totaling $65 million at the Department of Forestry. Other vetoes will maintain a balanced budget as required by the state constitution.

Senate Republican Leader Fred Girod said the vetoes are politically motivated, and more should have been done before this fire season to address forest management.

“Gov. Brown wants more money for fire suppression and state police, but only with an emergency actively burning down the state’s doorstep,” Girod said in a statement. “After years of cutting these budgets, the action is a day late and a dollar short.”

Two major fires combined to burn more than 150 square miles in Sequoia National Park, tearing through groves of giant redwoods. The Castle and Shotgun Fires have “run through” the park, according to the latest fire incident report, burning homes in the tiny communities of Cedar Slope and Alpine Village to the ground while leaving others untouched.

Firefighters struggled against what have become familiar foes in recent weeks – gusty winds and dry, hot conditions. The fire, sparked by lightning strikes last month, have injured 12 people, forced the evacuation of more than 3,000 and destroyed 62 structures.

Estimate: Up to $150 billion in economic losses from fires

The damage total and cumulative economic loss is expected to be $130 billion to $150 billion, according to AccuWeather CEO Joel Myers. That’s about the same as a Category 4 or 5 hurricane, he said.

Myers said the estimate includes damage to homes and business and their contents, cars, jobs and wage losses, agricultural losses, infrastructure damage and the costs of power outages to businesses and residents.

Residents of one wildfire-besieged Oregon county posted ominous signs such as “You loot, we shoot.” Clackamas County Sheriff Craig Roberts said armed residents concerned about looters have been conducting stops on their own. Roberts said law enforcement has the situation under control and urged residents not to take the law into their own hands.

In neighboring Multnomah County, Sheriff Mike Reese warned residents to stop setting up illegal roadblocks or they could face arrest. “We understand everyone’s concerns and anxiety, (but) roadways are open to all users.”