MARTIN COUNTY— Florida Highway Patrol Trooper Joseph Bullock will be remembered by his family, coworkers and motorists he helped during his career as a man committed to law enforcement who protected Martin County.

“If Joe were here, he would say to all of you in uniform to have courage and to be courageous because you absolutely need that in today’s time,” said Jon Bullock, Joseph Bullock’s father. “He would also say that you have to have humanity because courage without humanity is just inhumanity.”

More: Portion of I-95, FHP building to be designated for slain FHP Trooper Joseph Bullock

The Martin County Sheriff’s Office hosted a ceremony Tuesday and unveiled a memorial in the lobby for Trooper Bullock, who was fatally shot earlier this year while working on Interstate-95. He had stopped to help a motorist with a disabled vehicle. That motorist fatally shot him at close range and later killed himself. 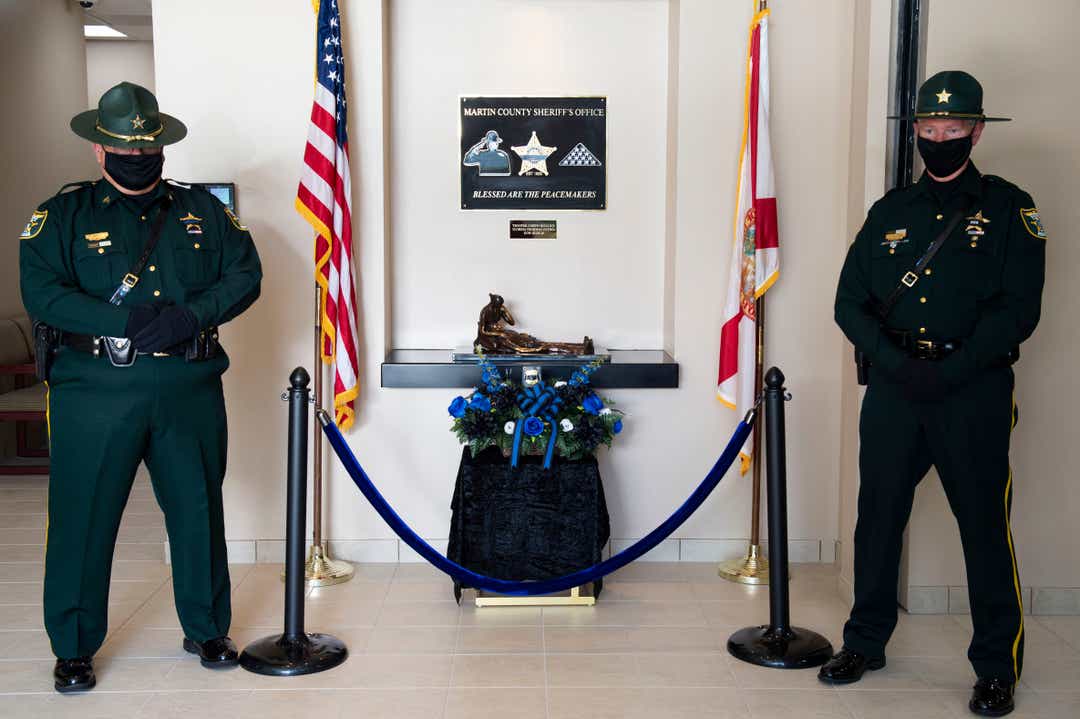 Bullock, 42, is the first law enforcement officer in the history of the county to be killed in the line of duty, Martin County Sheriff Will Snyder said. Monday would have been his 43rd birthday.

Jon Bullock said he wanted to thank and bless all of the law enforcement at the event.

A large wall plaque with Trooper Joseph Bullock’s name and a bouquet of blue and white roses sat beneath the plaque in his honor. The plaque adorns a wall in the Sheriff’s Office lobby visible when people walk through the agency’s front doors.

“What that shows me is it wasn’t a trooper with Florida Highway Patrol that got killed, it was a member of the law enforcement and safety community,” he said. “Everybody came together to help us be able to get through that tragic event and they continue to do so today.” 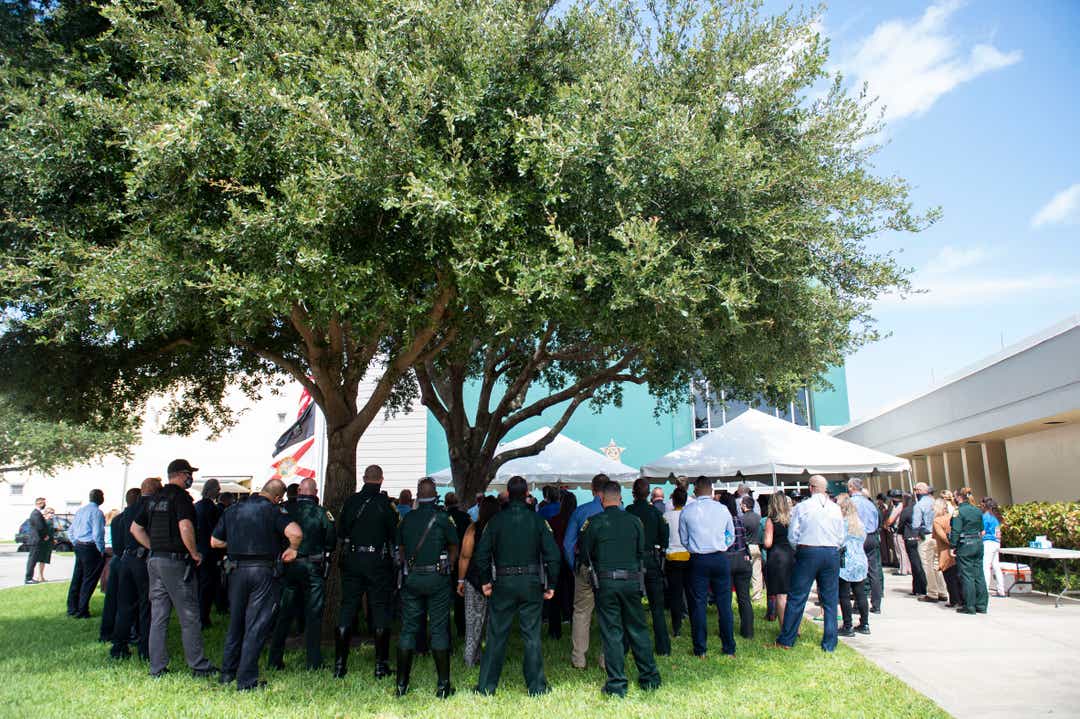 Spaulding said Bullock’s family has been the agency’s rock stars.

“We sent troopers over to your house right after the event to try to console you and make sure you’re provided for, but I think we got better service out of you guys than we were giving,” he said. “You are a phenomenal family.”

“There is nothing we can say here or do today that will in any measurable way make sense of what happened,” Snyder said.

He said Bullock was a hero because he acted with grace and dignity and served Martin County and fulfilled the oath he took as a law enforcement officer.

Bullock was killed Feb. 5 after he stopped Franklin Reed III, 30, who then shot Bullock at point blank range in the head as Bullock was in his patrol car.

Reed then fired at least two rounds at off-duty Riviera Beach Detective Jemel Headings, who had stopped to help while on his way to work. Headings returned fire, striking Reed, of Palm Bay, in the chest. Reed then shot himself in the head and died.

“It was not lost on any of us the sacrifice you (Headings) were willing to make to try and save Joe,” Sheriff’s Maj. John Budensiek said during the ceremony. “We appreciate you being here today and we appreciate your heroism.”

Along with the plaque and memorial at the Martin County Sheriff’s Office, Bullock’s name is expected to be added to the National Law Enforcement Officers Memorial in Washington D.C., Spaulding said Tuesday.

He said all of the paperwork has been submitted and FHP should hear back in November or December from the agency.

“I am confident we will be recognizing Joe in Washington D.C. on the National Law Enforcement Memorial Wall in May of next year and we look forward to the outcome later this year,” he said.

The Florida Police Chief’s Association and The Florida Sheriff’s Association have designated the month of September to honor the service and sacrifice of Florida law enforcement officers killed in the line of duty in 2020.

A portion of I-95 in Martin County where Bullock was shot will be designated  “Trooper Joseph Bullock Memorial Highway.” The area is between mile markers 105 and 110. The 110 mile marker is at State Road 714 in Palm City; the 105 is 5 miles south of that.

The FHP station where Bullock, a U.S. Air Force veteran, was based for nearly two decades, at 2929 N. 25th Street in St. Lucie County, will be designated the “Trooper Joseph Bullock Building.”

Sara Marino is a TCPalm breaking news reporter  covering Martin County. You can reach Sara on Twitter @saradmarino or email her at Sara.Marino@tcpalm.com. If you’re a subscriber, thank you. If not, become a subscriber to get the latest breaking news.